Vision: Empower businesses, organizations, and nonprofits to successfully navigate their path, creating the success they want.

Mission: Equipping businesses and professionals with the skills needed to achieve their goals and dreams.

The 3Raptor Team utilizes researched-based approaches, to provide the tools needed to achieve your goal. Through the use of coaching and consulting services designed to enhance leadership skills, promote team building, increase efficiency, and overall output of the business, creating a lean, positive organization that produces maximum results through positive, goal-oriented steps designed to grow skills at every step throughout the journey.

Choose to invest in your dream. Hire the experts who can successfully guide you through your journey.

3Raptor Consulting views each client as an individual, our services are not cookie-cutter, rather customized. We promise to deliver quality work, intentionally designed for your business and needs. No job is too small or too big. We adjust to you and your needs.

We believe every organization, every person, has a value and something positive to add to the community and world. Through in-depth conversations, guided reflections, and analysis these strengths are identified and then used to guide business decisions.

We value honesty, integrity, transparency, growth, professionalism, learning, and kindness. We work to show these values in every interaction we have, whether business or personal.

After years of frustration, and the inability to afford consulting services, which directly limited the quality of work and employee development available, Sara Orellana-Paape founded 3Raptor Consulting as a place where small businesses and nonprofits will receive the same high-quality services available as large corporations. So often, small businesses and nonprofits are seen as unprofessional or not able to offer the same quality services as large corporations due to limited budgets. 3Raptor Consulting levels the playing field, teaching you how to use your small size to make quick decisions and move faster than large corporations, yielding professional results, lean business models, and highly intuitive and developed teams.

Utilizing her extensive background in the professional world, founder Sara Orellana-Paape brings her passion for fighting social justice issues to the table. She carefully recruited a team who is as passionate about investing in local communities, empowering professionals, and providing the tools small businesses and nonprofits need.

3Raptor Consulting provides operational services and support to small businesses and nonprofits. We understand the constraints of small budgets, these oftentimes leave teams overwhelmed and overworked. Instead of wondering how you are going to accomplish the next project, or how you are going to build your team, hire 3Raptor. We specialize in helping organizations streamline their budgets, build teams, and fill in where needed. We are the temporary staff needed to complete a project, write a proposal or grant, or help with social media and website content. Allow us to review your business and budget and give you the tools needed to take your business to the next level.

The way a team works together either makes or breaks a business. Communication is important, but listening skills and understanding an employee’s strengths, as well as your own are key. 3Raptor can teach you how to communicate effectively with your team, and your team on how to listen and absorb this information. Understanding your strengths, as well as your team’s strengths will allow you to capitalize on them and take projects to the next level. With 3Raptor you will learn to use your size to move faster, make decisions quicker, and attain your goals. 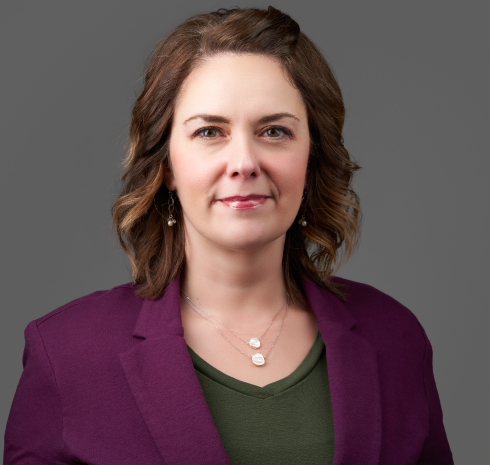 Sara Orellana-Paape brings well over a decade of leadership, writing, business management, and coaching to 3Raptor Consulting, of which she is the founder and director. Sara has a bachelor’s degree in English from Rutgers University, a Master of Science in Social and Community Services from Capella University and a Master of Public Health with a focus in Epidemiology from Kaplan University. She has also completed a nonprofit management certification course from the Oklahoma Center for Nonprofits and is a graduate of Standards for Excellence in Nonprofit Management.

Sara is a freelance writer, writing a weekly column that is published statewide and has cultivated a wide circle of readers, including some out of state. She also writes special pieces for newspapers and magazines.

Currently, Sara is serving as the Southwest OKCEO for the Potts Foundation. In this role, she is working to further the importance of early childhood education. She also serves as a community educator for the Alzheimer Association.

Sara has over ten years’ experience managing nonprofits, including turnaround situations, and is an accomplished grant writer. She has founded a county-wide coalition and worked with several national partners to improve the local community. Sara has partnered with Catholic Charities to teach English as a second language and citizenship classes. She has extensive experience leading classes in topics from leadership to good management to learning about yourself.

Sara believes a good team is one that is built upon strengths and skills, utilizing exemplary communication skills. Sara has experience in public speaking, speech writing, and negotiations. She is bilingual and has interpreted in many professional settings.

But of all her accomplishments, raising her daughter is her proudest, no accomplishment will ever surmount the pride she feels as she watches her daughter grow into an incredible woman. She is married with one daughter and three rescue dogs. Her family is most valued to her, followed by her community. She believes we all serve a purpose in this life, and it is our responsibility and duty to leave everything better than we found it.

True to her Southern California roots, Sara can most often be found in cutoffs and flip flops, taking care of her dogs and laughing with her daughter. She is most comfortable outside, surrounded by water, with people who are passionate about fighting social justice issues. 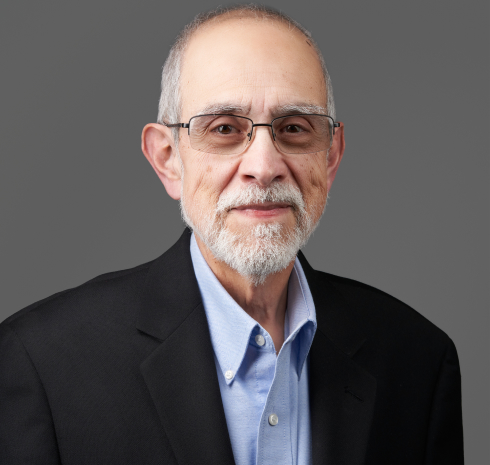 Gus is what he calls a “first-class American citizen”, a nickname given to him by the judge who swore him in as he gained his citizenship. In the judge’s words, “I had no choice, I was born an American Citizen, but you people here in front of me today have chosen to be American Citizens, that is what makes you first-class citizens.”

Gus started his adult career wanting to be a structural engineer, however, opportunities propelled him to the world of information technology. He began as a programmer for the IBM-402 tabulating machine, and also had a stint as a department manager for a high-end retail store in Mexico City. After emigrating to the United States in 1972 and a three-year job grinding and polishing lenses while learning English, he started working for a bank in Southern California as a programmer. He later progressed to other banks and positions in the information systems area, including systems programming business analyst and management. And since his ordination in 11-03-2017 a Permanent Deacon for the Catholic Archdioceses of Oklahoma City.

After a few years, Gus moved to Lincoln, Nebraska, to become part of a team that would take a radio manufacturing company from an antiquated environment to a new centralized data processing system in a modern computer. He managed the installation and training of the distributed environment and remote staff in Miami, FL, and Humacao, PR. At the completion of this project, Gus returned to Southern California, where he married Krystal in 1978 and both had Sara in 1979.

In Southern California, Gus worked for multiple banks, including the Federal Reserve Bank of San Francisco in the Los Angeles area, being the Senior Operations Analyst for all four branches. He then started working for a national resource management company for the financial industry. Gus was transferred to Oil City, PA, and later on to Freehold, NJ where he became Account Manager.

In 1993, Gus moved back to Mexico City where he worked for a resource management group that provided IT services to Ford, a PC maintenance and sales company, and a janitorial services company. Gus returned to the U.S. in 1995, where he went on to work for a consulting company that took him to many banks in the United States as well as two two-year contracts - the first in Warsaw, Poland, and the second in Bangkok, Thailand. After his two international assignments, Gus returned to contracts in the U.S. until his retirement in December 2018. 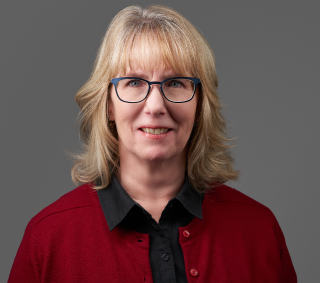 Krystal has worked in finance for well over 40 years. She has cultivated a talent for creating lean budgets that empower businesses to achieve more while spending less. She adds this talent to budget development and business proposals and plans. Krystal manages all 3Raptor donations, ensuring we remain true to our vision. 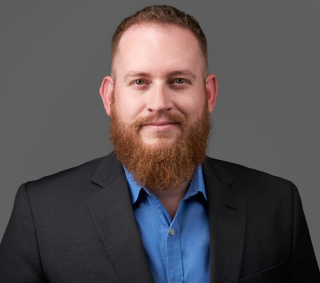 Rick adds his unique perspective to all 3Raptor projects. Currently working full-time as an Art Director, he provides the creative lenses needed to bring layouts to life for clients. Having earned his MBA from Capella University he assists with project management and other needs of clients. 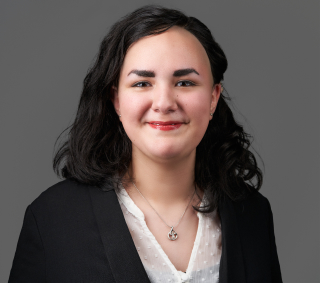 Rabeckah manages the 3Raptor social media and offers her expertise to clients. Currently balancing her work for 3Raptor with school and working as a part-time biologist in training at a local aquarium, Rabeckah is sure to be found volunteering in the community and leading socially conscious projects for her team. 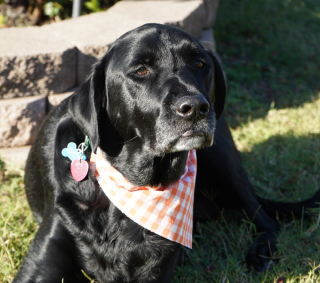 Raffy, rescued at 5-weeks, has always specialized in adding the heart to any situation. No matter the stress, this good boy is always ready to listen and offer advice. Working to overcome many challenges, Raffy has taught the team how to stay positive no matter the challenge and to see the value in everyone no matter their disability. 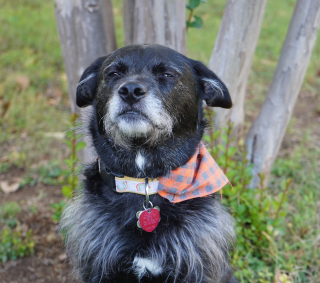 Stark, rescued as a wee pup, this fierce dog is loyalty personified. Always on alert, he maintains the safety of his territory, including the 3Raptor offices. An intruder has never made it through his security lines, not even the odd squirrel. 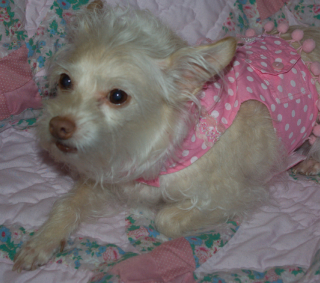 Sweet Nimmy was rescued as a teenager. Working through the trauma of a challenging puppyhood, Nimmy is a daily reminder of the power of hope and love. Nimmy has overcome many challenges and now enjoys a quiet retirement and full belly. 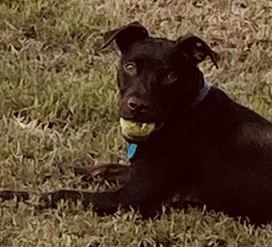 Selina Comida was born February 3, 2021 in Oklahoma, and joined our interns May 6, 2021, and like the rest of our interns she is a rescue dog, she survived Parvo at a tender age which slowed her growth. She is doing very well now.

Selina Comida has been named Happiness and Wellbeing Officer. One of her great talents is to get our attention when it is time to laugh or to take a well-deserved and needed break. When not in her officer role she has demonstrated an immense amount of energy, her drill-sergeant voice carries well and gets everyone’s attention. 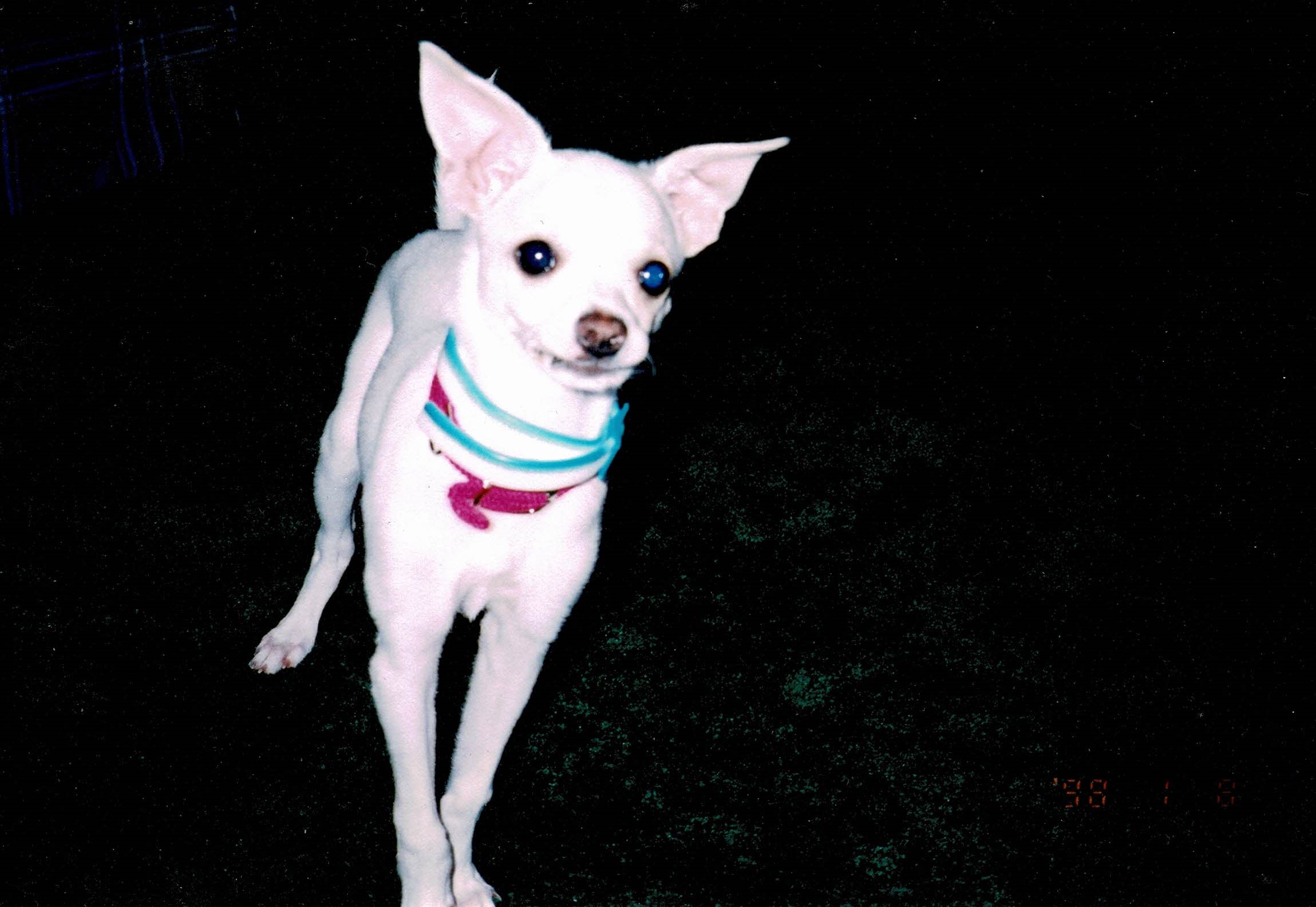 Matriarch of the Interns

Sissi was born in Texas in 2003, just a few months before Rabeckah came into the world in December of the same year. Sissi spent most of her time with B until Nim moved into her house and her protection. Sissi passed in 2016 after a devoted life to her charges. 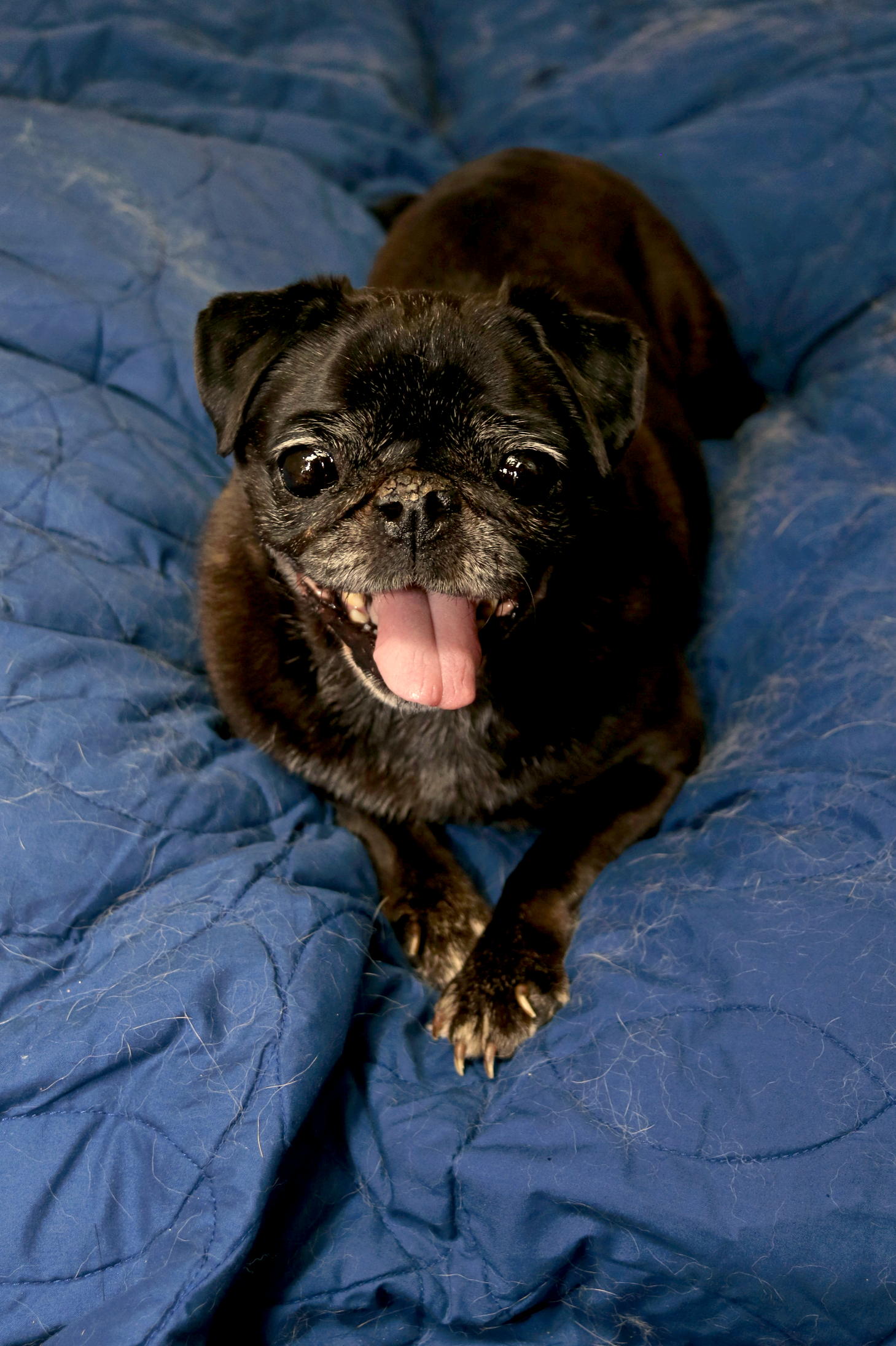 Never has a dog been filled with more moxy than Frenchy. A Bronx native, her gruff voice and Yiddish phrases were a cover for her deep love of the family who took her in during the last three months of her life. A fighter to the end, Frenchy left a legacy of remembering the need for pretty flowers in the midst of long days, and never give up. 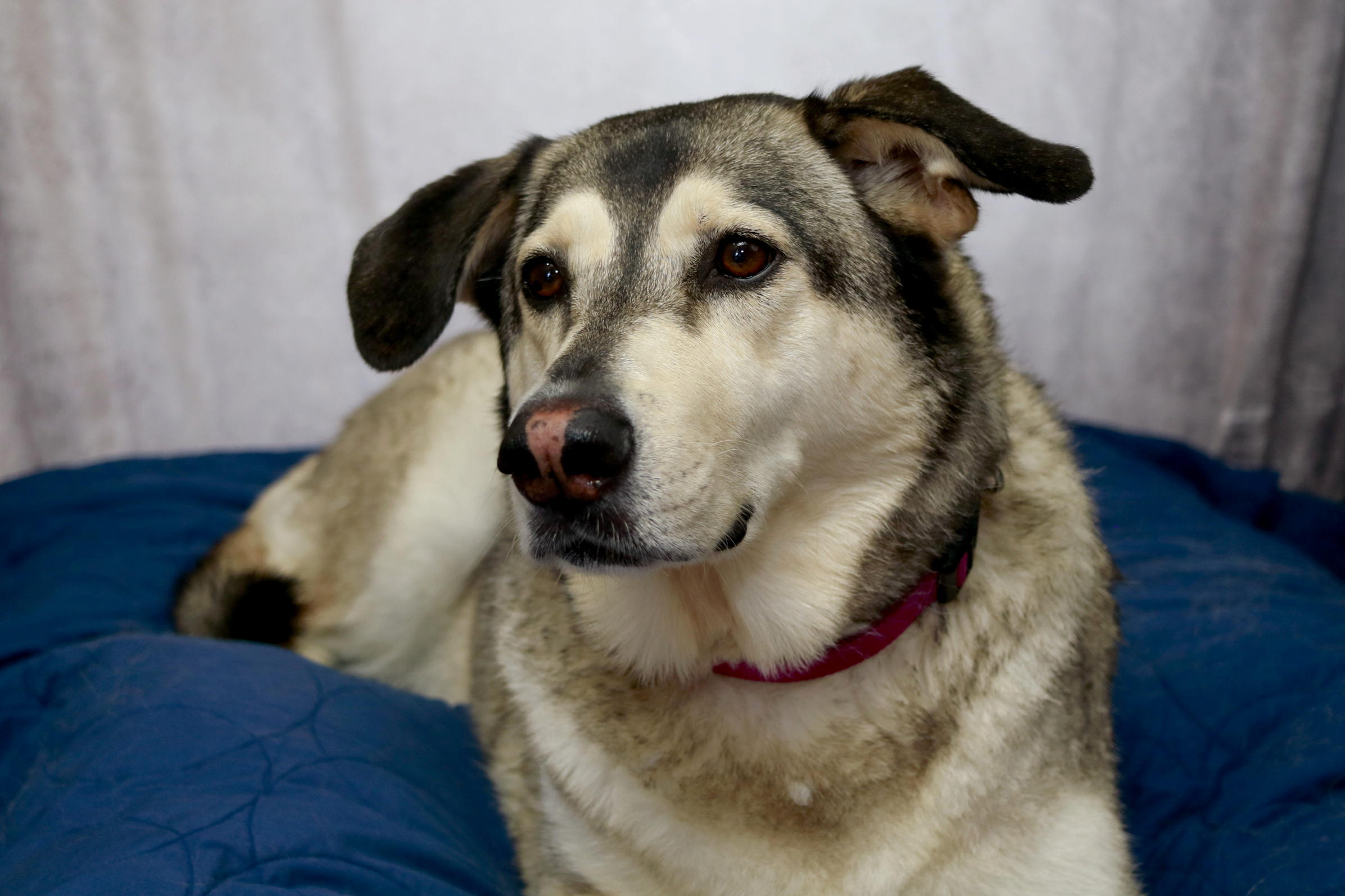 Sheebah came to the family during a time of mourning and loss. Understanding their need for care, she quickly adopted them, creating a unified team filled with laughter and love. Her hobbies included bird watching, lunch reminders, and singing the song of her people. She inspired the team to stretch themselves, her gift was showing others their true capabilities.